What is Disc Golf?

Disc golf is played much like traditional golf. Instead of a ball and clubs, however, players use a flying disc or Frisbee. The sport was formalized in the 1970's and shares with "ball golf" the object of completing each hole in the fewest strokes (or, in the case of disc golf, fewest throws). A golf disc is thrown from a tee area to a target which is the "hole". The hole can be one of a number of disc golf targets; the most common is called a Pole Hole an elevated metal basket.

As a player progresses down the fairway, he or she must make each consecutive throw from the spot where the previous throw has landed. The trees, shrubs, and terrain changes located in and around the fairways provide challenging obstacles for the golfer. Finally, the "putt" lands in the basket and the hole is completed. Disc golf shares the same joys and frustrations of traditional golf, whether it's sinking a long putt or hitting a tree halfway down the fairway. There are a few differences, though. Disc golf rarely requires a greens fee, you probably won't need to rent a cart, and you never get stuck with a bad "tee time." It is designed to be enjoyed by people of all ages, male and female, regardless of economic status.

Disc golf can be played from school age to old age, making it one of the greatest lifetime fitness sports available. Specially-abled and disabled participate, giving them the opportunity to take part in a mainstream activity. Because disc golf is so easy to learn, no one is excluded. Players merely match their pace to their capabilities and proceed from there.

RULES OF THE GAME

Disc Golf is played much like ball golf.  One stroke is counted each time the disc is thrown.  The hole ends when the disc comes to rest in the chains or the bottom of the basket.  The lowest score wins.

TEEING OFF  Tee throws must be made within and behind the designated tee area.

LIE  The spot on or directly underneath the spot where the previous throw landed.  After the initial drive, each additional throw must take place with both feet behind the furthest point of the disc at rest.

THROWING ORDER  After teeing-off, the player whose disc is farthest from the hole always throws first.  The player with the fewest throws on the previous hole is the first to tee-off.

PUTTING  Within 10 yards of the basket, a player may not step past the point of their lie in making his/her putt.  Falling or jumping putts are not allowed.

UNPLAYABLE LIE  Any disc that comes to rest more than 6 feet above the ground is considered an unplayable lie.  After being declared unplayable, the disc must be thrown from the new lie on the ground, directly underneath the unplayable lie. (+1 throw penalty)

GAME ETIQUETTE  Players will refrain from dangerous or blind shots.  Please use a spotter if in doubt.  Do not break off branches or anything green.  You may move dead branches from your lie.  No taunting or unsportsmanlike behavior during play.  Never throw until the players ahead are out of range and fairway is completely clear of guest.  Please throw away your litter and respect all park property.

LOST DISC  All players on a hole are encouraged to view and spot the other players throws.  If a disc is lost then it is the responsibility of the group to look for the disc for a reasonable amount of time.  After the group judges the disc “lost” a player should take a drop at the last spot they threw their disc or re-tee. (+2 strokes)

BUILDINGS/VEHICLES  Any throw that strikes a building or vehicle will incur a mandatory +2 stroke penalty.  Play the disc where it lies. 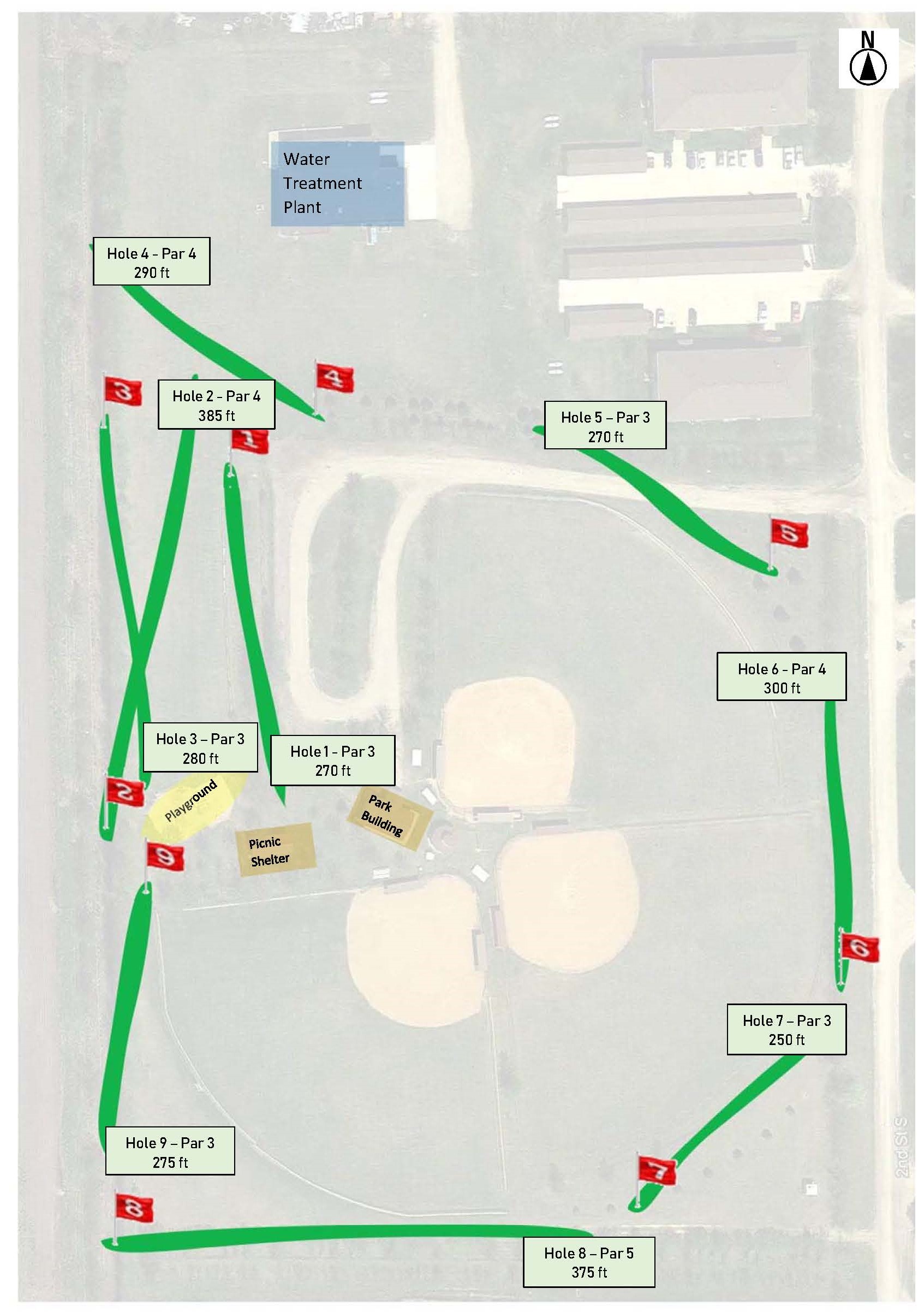